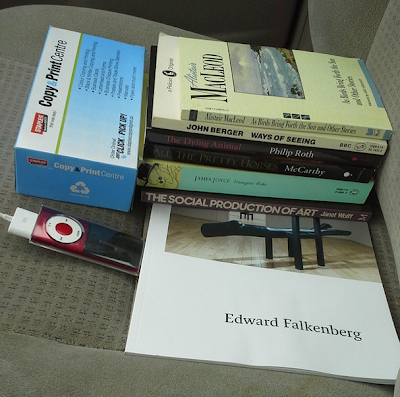 Pg 155- September 9th, 1936: "Many times during the summer I have hoped to obtain an appointment in Vancouver but without avail, so we are settling down for the winter again with only a few dollars to keep us. I have sold no sketches for six months so we are close to starvation."

"Emily Carr - Victoria - the noted painter has died. Strangely enough I woke up two mornings before boat day + told Barbara = Bert that I felt she had died. I had no knowledge of her even being ill - her illness was only known in Victoria for a week. This is my third premonition of this kind - all correct. How to account for this telepathy is beyond human science." Except he was totally wrong. She didn't die in 1936.

He left Nootka shortly thereafter. Reading through his journals here, I can't help but wonder about the impact of his WWI experiences on his psyche, and maybe on his entire generation of artists. Macdonald seems completely unsatisfied or maybe even betrayed by the way of life he was born into, and seems on a perpetual journey to find a better way. Spiritualism instead of Christianity. Trying to live off the land in a remote location. Automatism. Etc. There is a profound sense of yearning in this man that I see as paradigmatic of a larger trend within his generation. It's like they needed to reinvent what it meant to be a human being.

"We have come here to be away from the foolishness of humanity."