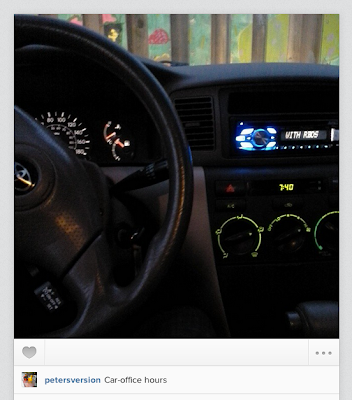 All of the books in my winter semester car library were purchased at Value Village in Whitby. The first one I'm reading is this:

This is Janet Wolff.

Pg 1- "Art is a social product. This book attempts to show systematically the various ways in which the arts can adequately be understood only in a sociological perspective. It argues against the romantic and mystical notion of the arts as the creation of 'genius', transcending existence, society and time, and argues that it is rather the complex construction of a number of real, historical factors."

Pg 1- "...I take a different starting point, and work towards a demonstration that art and literature have to be seen as historical, situated and produced, and not as descending of divine inspiration to people of innate genius."

Pg 2- "...it is clear that even approaching the arts from a sociological point of view immediately poses a threat to any traditional notion of 'the artist' or 'the author', whose creative autonomy appears to be reduced to a series of social, economic and ideological co-ordinates."

Pg 2- "...I shall argue that it is not useful to think of artistic work as essentially different from other kinds of work, and that, therefore, the issue of the practical activity, including creative or innovative activity, of any agent arises in the same way in all areas of social and personal life."

She totally had me at "hello".

She believes that historical materialism offers the best method of the analysis of society (as of 1981 anyways.)

Pg 10- Wolff explains the Tonio Kroger problem as illustrated by the characters of Thomas Mann and described Georg Lukacs as such: "The conflict of 'art' and 'life' is portrayed as a tragedy of other Mann heroes, particularly Aschenbach and Leverkuhn. As Lukacs sees, however, this dilmmma(sic) is posed as one which is historically specific, and arises for Mann because of the isolation of the modern artist in capitalist society. "The time, the present is at every point unconductive to art, to music - how then is it possible to create music of a really high artistic order without breaking free of one's time, without firmly and actively renouncing it?' (Lukacs 1965, p. 65). That is, it is not seen as the universal tragedy of the artist, who must escape his/her social and temporal environment in order to create. Often we do come across this paradox posed of one of the timeless problems for the artist; the artist is seen as outside society, marginal, eccentric, and removed from the usual conditions of ordinary people by virtue of the gift of artistic genius."

Pg 11- "The artist/author/composer as a social outcast, starving in a garret, persist as a common idea of a social type, and one particular form of a historical figure is transformed into a universal definition. It is not difficult to show that this ideology surrounding artistic production is itself the product of a particular period and set of social relations; more specifically, it is a descendant of the nineteenth-century Romantic notion of the artist."

Pg 11- "The first was the rise of individualism concomitant with the development of industrial capitalism. The second was the actual separation of the artist from any clear social group or class and from any secure form of patronage, as the older system of patronage was overtaken by the dealer-critic system, which left the artist in a precarious position in the market. Before this period, however, artists and writers were well integrated into the social structures in which they worked, painting and writing to commission from the aristocratic patrons, exhibiting in Academies, and in no sense defining themselves as outcast or as opponents of the social order."

Pg 11- "Indeed, even as a contemporary type, this view of the artist is misleading, since it refers to only one particular type of artist - the struggling, self-employed painter, trying to sell his or her work through the dealers and galleries..."

So far this is soooooo good. :)