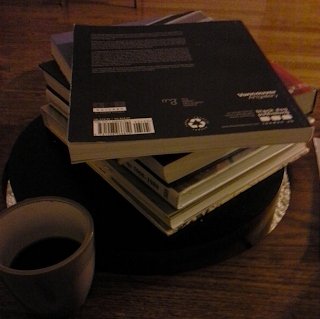 "The only review I read about the show had this to say 'The curio of the exhibition is by JWG - who has created a painting, apparently with part of the subject matter a woman, who has her viscara showing.' I nervously looked in the dictionary to discover what part of her anatomy was the viscara.' Just a bit relieved it was what it was."

"Things at the Art College are going nicely - have 2nd year painting students experimenting in expressive arts on Saturday mornings - results promising too + the are very keen + happy."

Pg 177- March 3rd, 1948 - "The interest was sufficient to fill the hall - that in itself must be rather disturbing to the chief who says 'nothing but Academic painting will be expressed in the Ontario College.' He does not know I have 70 painting students doing creative painting on Saturday mornings - he is never the to see what we are doing."

"Jackson (AY) is going away for 5 weeks so he is loaning me his studio. I expect to use the garage at home after that if the weather is warm enough."

Pg 178 - Macdonald bought his first camera so the he could take pictures of his work. The film took 6 WEEKS TO BE DEVELOPED. Crazy.

"At the Ontario College of Art the seed of modern creative expression isn't planted on a rock. The soil around it is slowly warming _ the first tiny root is digging down."

Barbara + I are going to Provincetown - Cape Cod - for two weeks in June - guests of Mrs. Margaret McLaughlin (Buick Motors). She is going to Hans Hoffmann's summer school + I am taking this chance of meeting Hoffmann." A footnote at the bottom of the page tells us that Margaret McLaughlin is "the painter Alexandra Luke". Had heard she married a McLaughlin, but I wonder if she was actually born McLaughlin? We'll see what Wikipedia has to say on this.

Ok. And I'm not even remotely saying that Lawren Harris and Alexandra Luke aren't really good painters. But Harris is a Massey, and Luke is a McLaughlin, and it would be pretty naive of anyone reading this not to think those facts haven't played a major role in the development of our national art history. But anyways.

In the summer of 1948, after working with Hoffman in Provincetown, the Macdonald's bought a 1935 Oldsmobile and drove across North America to Banff (where he taught for seven weeks) and onto Vancouver. Stacey and I really want to do this soon with the kids.

Pg 183-184: Macdonald was chose by the Canada Council to work/lecture in Holland. It sounds like an awesome experience for the Macdonald's, but my favourite quote in there is this: "Everything is practically given away to the Canadians here. The Breda people were liberated by the Highlanders + the Canadians + the have not forgotten..."

Pg 194 - April 15th, 1954: "In February eleven of the creative painters got together, rented a gallery in town + put on an exhibition of experimental painting. I was one of the eleven, the eldest member. We had a very successful show, with a number of sales + record crowds. It was a bombshell of the Art World in Toronto. It set "the established + recognized artists" on their ears, made them mad as the "Painters XI" received TV, Radio, news galore. And we sold six times more paintings than the Ontario Society of Artists did in their six weeks exhibition which followed us. I received a very nice letter from Mr. James J. Sweeney, of the Guggenheim, N.Y. in which he privately has informed me that he will come to see the work of the group."

Pg 195-196: The Macdonald's spent 1954 in France through some program with the Canada council. Most of the correspondence from the period (so far) is relatively touristy. My favourite quote from which is this: "There is nothing slower in France than the post office."

Pg 197- The date here is marked as "Probably 1957" by someone other than Macdonald. Anyways, he states: "Clement Greenberg, one of the most highly considered critics of the U.S.A. saw some of my early summer paintings + was decidedly encouraging. He said my new work was good enough for any top gallery in n.Y. + for any sake keep painting + listen to nobody about your colour, technique, comp or anything else."

"I use a lucite plastic, thinned down with turps, with straight oils, using ordinary house painters brushes by various widths. I like the flexibility of those brushes better than the hogs-hair brushes."

Pg 198- In a letter from 1959, Macdonald claims that a Painters 11 exhibition which was to be held at the Canadian Embassy in Paris was prevented by the Governor General of Canada, Vincey Massey. Hmmmmm.

He also seems to have developed some kind of rift with National Gallery of Canada director, Allan Jarvis. But you know, Macdonald does seem to just develop a lot of these kind of rifts. Just sayin'.

December 10th, 1960. In a letter written by Barbara Macdonald to Doc and Riki: "This is not a happy letter but I thought you would want to know that James died suddenly of a heart attack on the 6th Dec. If I have the date wrong it is because I am still confused. The only thing that has buoyed me up is that his passing was so wonderful. I felt that I had been privileged to be in the presence of a great mystery. Although he was in great pain and in an oxygen tent he joked with the nurse + the orderly and at the very end looked straight + clear + said "Don't worry". So he did unafraid which is a great comfort to me."

This happened 54 years ago, almost to the day that I started this project. I'd be lying if I told you I'm not feeling kind of emotional right now. Over the past couple of months, I've started to feel like I know Jock. He's become a friend to me, and the candid tone of Mrs. Macdonald's letter has left me feeling, well, kind of shaken. I have sat on two death beds in my lifetime, and Mrs. Macdonald's letter reminds me very much of those experiences. I'll always remember those last looks my loved ones gave me before they passed - an all in one glance of love, gratitude and resignation. Mrs. Macdonald's letter has reminded me of what it is to grieve.