It's really bloody cold in this house this morning. Like. Really cold. 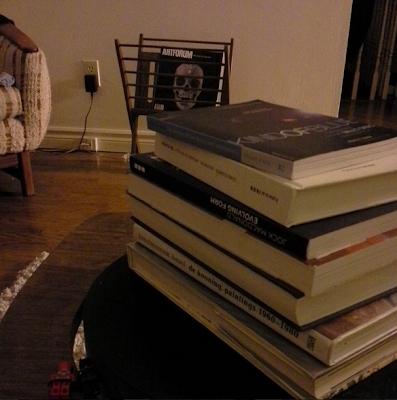 March 27th, 1947- The Macdonald's have been in Calgary since late August, but still haven't found a place to live. (They're staying in some kind of boarding house.) As a whole, he's feeling a little more encouraged about Calgary (and it's art) though: "I am trying to form a small group, to lift themselves free from the frustration they have so long endured from the Alberta Society of Artists. This is probably dangerous for me in my present position, as it runs counter to Glyde, but I don't care. Something must be born here to give the spirit of creative effort its head. If it costs me my position, in the end, it is worth that I believe." (I totally guarantee that if he lost his position over it, we would read endless paragraphs on his subsequent woes. Macdonald can really complain about his lot in life.)

April 27th, 1947 - They finally have a place to live, "a nice suite in the Elbow River district". I've never been to Calgary, although I did stop there once in an airplane. You could see it pretty well from the airport window. It struck me as shockingingly flat, until, you know, it rather spectacularly stopped being flat and started being the rocky mountains. Or at least, that's the mental image of the place that's formed in my memory. But anyways, Macdonald says: "In four weeks I will be through my first year of teaching. It has been a hard year, with many difficulties which cannot recur, and endless fights against impossible conditions + sheer stupidity. I feel we have won a lot of fights." And then: "I have formed a group of six progressive young artists + have obtained the North Gallery for them in Vancouver, next November, for their first showing." Awww. That's so cute. He formed a little 'group'. Modernists are so adorable with their little clubs.

May 31st, 1947 - "This past week I have been asked to take LeMoine Fitzgreald's position in the Winnipeg School of Art and be acting-Principal next year." He didn't accept that position as it was only for one year. "Another teasing offer is a renewal of the request to come to the Ontario College of Art in Toronto. They invited me to join them last fall but I preferred Calgary. This time they offer me three hundred a year more than I receive here. The position is nothing more than coming on to their staff. Again, I doubt it is worth while leaving the Western region. I believe that if people want me now, it is quite possible they will want me in a year or two from now." He has an upcoming show at the San Francisco Museum of Art and at Hart House, Toronto.

For whatever reason, I have this song stuck in my head this morning. (It's partly because I bought this record at a second hand shop last week, and it's amazing.) But anyways:

November 9th, 1947 - So JMD totally took the job at OCA, despite his previously mentioned objections. He is writing from a basement apartment at 23 Millbank Avenue in Toronto. (Gotta find that place.) Heyo! Dude is converting his garage into a studio. (That's what I did! For the record, this is my garage studio theme song.) Although, there's this: "It is likely that we will hang on to this place with the hope that eventually we will be able to get one of those large studios, in The Studio Building, which Lawren Harris built for the 'Group of Seven'. " Hey! Where the hell is that? That's awesome. Gotta find that building. Kinda crazy I've never even heard of this, but it has a full Wikipedia page. As an aside, I knew Lawren Harris came from money, but I DIDN'T know he came from friggin' Massey money. Crazy. Sorry, but who is it that thinks that who you know and where you come from isn't important in the art world?

Anyways, onto making breakfast and lunches for the kids (and Stacey). Busy day today. I'm HOPING to mask and finish the text on one of my white paintings today at the RMG. This part of each painting pretty much has to be finished in one go or else I'll have wasted my time. I'm off to Kelowna tomorrow after work, and can't have a painting in the RMG covered in masking tape for four days. That would look like a big steamy turd. I mean seriously, what would my admirers think?