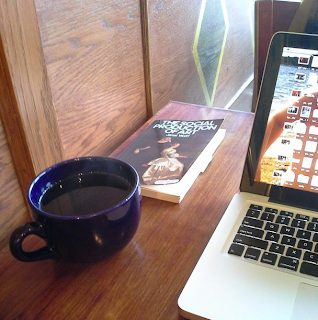 Pg 19: Wolff spends a LOT of time describing and defining the terms of her argument in relation to (then) contemporary and to (still) historical discourse. On this page, she gets into "the nature of human agency", and although she's a very good writer, and her position is easy to follow, it gets boring as hell for the next few pages, suffering from that way that PHD people need to bullet-proof-the-hell out of their positions. (Yawn). Honestly, I came really close to giving up on Ms. Wolff through this part, as her distinction and use of "human agency", "the nature of freedom" and "the duality of structure" is pretty boring, and is certain to be less interesting that the Cormac McCarthy novel that is next on my reading list. Anyways, like I said, it DOES get a lot better again. Also, there are some interesting passages in the boring part, such as:

Berger and Luckmann say that "...society is constructed, historically, by people and groups of people, and those people themselves have been constructed in and by society (through socialisation and internalisation.) Reality is socially constructed, and that reality takes on an objective character, facing the next generation as an existent fact." Furthermore their argument...."in demonstrating that any act is socially determined, it throws into question the notion of free action." Except it really doesn't, but whatever.

Pg 20-21: The are biographical, psychological and social reasons for most of the things we do, and each level of description is legitimate." This is so PAINFULLY obvious and instrumental, as is SOOO much of these few pages. That said, it might not have felt that way in 1981. I was pretty much born and raised (artistically) on post-modern/post-structuralist discourse in the mid-90's. In that regard, it's important to keep in mind when Wolff says things like "the emerging field of cultural theory" exactly how old this book really is.

Pg 26: Chapter Two: The Social Production of Art (or when things start to get better again)

Pg 26: She starts with a quote from Arnold Hauser - "The fundamentally new element in the Renaissance conception of art is the discovery of the concept of genius, and the idea that the work of art is the creation of an autocratic personality, that this personality transcends tradition, theory and rules, even the work itself, is richer and deeper than the work and impossible to express adequately within any objective form."

"According to Hauser, Michelangelo is the first modern artist in this respect, and in 'the claim independently to shape the whole work from the first stroke to the last and inability to so-operate with pupils and assistants."

Pg 27: "It is certainly true that the conception of the artist as unique and gifted individual is an historically specific one, and that it dates from the rise of the merchant classes in Italy and France, and from the rise of the humanist ideas in philosphy and religious thought."

Pg 27: "I shall argue that it has never been true, and it is not true today, that the artist has worked in isolation from social and political constraints of a direct or indirect kind."

Pg 32: Ok. When I said this part got better, I'd totally forgotten about a lot of these pages. Soooo thoroughly obvious that ALL artistic fields (or anything) aren't possible without society and available technologies that weren't invented by the people that use them. Here, Wolff pulls out gems like: "Even writers need materials, meed to be literate, benefit from acquaintance with some literary tradition and conventions...." Yup. And we all need fire to cook, and people invented houses for us to live, and the wheel to drive a car and yada, yada, yada. Although (painfully obviously) true, it does NOTHING to enhance her larger point.

Pg 37: There is some cool stuff in this part in the impact of technology. Such as - "Ian Watt, for example, has maintained that the rise of the novel in the eighteenth century, with its characteristic focus on private experience, love and individualism, is closely related to the growth of the new middle class, particularly the newly leisured group of middle-class wives, with time to read. Potential audiences produced specific types of writing."

Pg 40: More obviousness (although obviously true): "Social Institutions - In the production of art, social institutions affect, amongst other things, who becomes an artist, how they become and artist, how they are then able to practise their art, and how they can ensure that their work is produced, performed, and made available to a public. Furthermore, judgements and evaluations of works and schools of art, determining their subsequent place in literary and art history, are not simply individual and 'purely aesthetic' decisions, but socially enabled and socially constructed events."

Pg 42: "Mason Griff has argued, 'Because recruitment into the art world is neither tightly limited nor carefully controlled, we should not be led to assume that artists somehow drift into art. There exists a whole social paraphernalia for getting persons committed to their artistic identities." Furthermore Griff "...investigates, in the American context, the influence of parental and familial values and pressures, the roles of schools, and other social factors involved in the initial choice of a career in painting." This is so true. Basically, all art students (and most university students generally) are middle class or better. An awful lot of families don't want their kids to go to art school. My great aunt was a painter, and my parents were teachers. I think both of these factors are super important in my own example. My parents were very supportive of me going to art school, but with the very specific expectation that I would go to teachers college afterwards.

Pg 45> "Painters are often commissioned by industrial corporations to execute works, or employed as community artists or as artist-in-residence at universities. And perhaps the most important development in the twentieth century has been the growth of government patronage of the arts (what Janet Minihan has called the 'mationalisation of culture'). In Britain, this operates at the moment through the Arts Council and Regional Art Associations, working in conjunction with local authorities, through grants to artist and writers and funding projects. Although one would not expect any direct intervention by the respective 'patron' into what artists actually produce, it is clear that funding bodies are no more neutral than any social organisation, and that success of some artists at gaining sponsorship and the failure of others is likely to be related to the type of work they do." Furthermore: "That is to say, it is still true in our own day that art which is successful in reaching a public by being 'bought' achieves this through various social structures and process, and not simply because it is, in some sense, just 'good' art."

Ya. Totally. This part is really superly true. And I think it's interesting how Ms. Wolff's description of the British council so closely mirrors our own. (In fact, I do know that the Canadian Art Council "arms reach" funding model was based on the British system.) Regardless, it's important to think about how integral two of these things effect the development of art in this country, and why our art is so different from American art. I think in Canada, because the art market here has traditionally been quite weak, art has developed mostly because of granting, artist run culture and academia. These things have privledged a certain kind of art. That art is generally kind of smart, and the artists who make it tend to be relatively articulate since success in any of these fields requires a certain degree of self-articulation. Honestly, that's my favourite thing about Canadian art. In general, artists who become successful (traditionally) here have done so through a tremendous screening process of perpetual peer review. And although that may be changing a bit, it's part of our cultural DNA. (Academia still plays a HUGE role in shaping Canadian Art, as most of the best artists in this country are employed at one University of another.)

In America, where success is far more determined by market viability (and the idiosyncratic whim of uber-collectors), the same degree of self-articulation is not at all necessary. I CANNOT TELL YOU how many artist talks I've been to by American artists where the artist was, in fact, a giant boob incapable of speech. And I mean seriously, I'm talking about artists with graduate degrees from YALE and shit. They would just not have the skill set to succeed in this country. That said, I think that's also why some of our great artists don't do as well other places. A different skill set is required to succeed in those environments also. Those skill sets are all socially and historically determined.