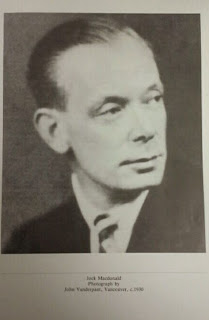 pg. 7 -"It is on a superior plane to the mental that feelings engender thoughts; and only through developed intuition is the individual able to reach such a plane consciously. To lead, awake or develop our generation to such a state will be the goal alike of purposeful artists and teachers." A quote from Adolfo Best Maugard in his book, "A Method of Creative Design" from 1926. The quote was transcribed in Macdonald's notes in 1932.

-wounded while serving in France as a 17 year old with the 14th Argyll and Sunderland Highlanders as a Lewis gunner. He was hospitalized for a year. Studied at the Edinbugh College of Art.

-head of the design department at Lincoln School of Art in 1925. In 1926, he took a job as Head of Design at the Vancouver School of Decorative and Applied Arts. (This is now Emily Carr University.) Frederick Varley was head of painting.

pg-10 - Became a founding member of the Canadian Group of Painters. Totally didn't know that.

pg-11 "the creative artist's duty is to convey new reflections about life which the masses have not yet become aware of and it should be understood that the conscious level of the artist is above the conscious level of the masses." from JMD's "Reflections on a trip to the Canadian International Seminar in Breda", Highlights IX, 1950. Despite the fact this statement is probably kinda true, it still comes off totally snotty in todays rear-view-mirror. A totally Modernist sounding sound bite. Furthermore, he was looking for "the universal truth all-relating harmony." Totally in keeping with his era.

pg-13: Jack Shadbolt on Varley's advice: "Forget anything not mystical."

Varley and Macdonald started their own art school. The British Columbia College of Arts opened in the fall of 1933.

-he became very interested in the writings of the German philosopher, Oswaldo Spengler and the Russian, P.D. Ouspensky.

pg 14: Like most artist initiated art school's, Varley and Macdonald's closed in 1935. Nope. Couldn't see that coming at all. We do keep trying though!