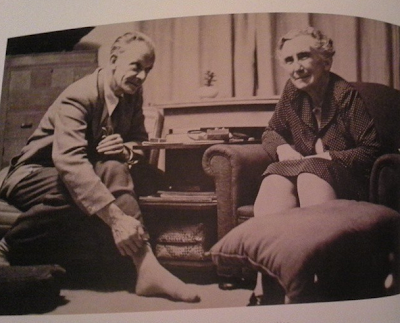 pg 70- The picture above is of Jock Macdonald and Dr. Grace Pailthorpe in London, 1949.

pg 75- Jock Macdonald on OCA: "Now, you will ask, what about the instruction? Isn't the place very academic + conservative? Yes! decidedly so. But I have taken it that I have been asked to break through the old academic instruction + think I am doing already."

pg 76- Jacques, who before taking the head curator position at the AGGV was associate curator at the AGO, totally gets Toronto art: "Toronto is a city that supports a diversity of artistic practices. There is no identifiable school, brand or narrative to describe the work produced there." EXACTLY!!!! That's why it's so great (and why Vancouver sort of isn't). Vancouver's a thing. A very specific thing, and it you aren't a part of or aren't producing that thing, there's basically no interest in you. Toronto is soooo many different things. That's why it's so great. Really, and I mean this sincerely and un-sour-grapes-idly, I much prefer Toronto to New York now. Art doesn't really happen in NY anymore. Capitalism happens in NY. That's not the same thing. In fact, money usually just gets in the way of art happening. It ruins artists. People here need to recognize how good we have it.

Ok. That's not really a fair indictment of NY art. There's still some amazing art in NY. But NYC is to art what Hollywood is to film. It's like an art theme park. Everything is so big and over-the-top and superhuman, because most of it, is made by whole teams of people. It's blockbuster stuff. And that can be wicked cool sometimes. (Like, I kinda can't wait for the new Star Wars movies and all). But it's something else that happens here, and that something else that happens is good and real and authentic to what art has been about before the last twenty years (which is mostly about being expensive entertainments and investments for new money). I think it would be very difficult to be a good artist in that environment, and I think it kills an awful lot of them. Anyways.....

pg 76- On Macdonald's teaching, David Blackwood said: "Jock Macdonald was an exceptional teacher and a great artist. His philosophy of art was very broad and style was of no importance to him. He was totally capable of confronting realism and non-objective approaches to painting. He was a great believer in the evolution of the artist, sustained development and the maturing of individual vision, something not quite tolerated today perhaps but nevertheless vital to all serious art." I can jibe with that.

pg 77- "Perhaps, though, his truly great achievement during his Toronto years was all that he did to promote abstraction, change the teaching philosophy of the Ontario College of Art and - ultimately - transform the cultural character of that city." Wow. That is a SERIOUS thesis. I LOVE IT. Jacques is swingin' for the fences. Love it.

pg 80- I find it kind of funny that Macdonald says first and second year students are "formative + there are no barriers to break down" because this is pretty much the exact opposite of my contemporary experience. Basically all you do in first and second year is break down their barriers. Kids tend to come into art school with very clear ideas of what art is, and what they like, and you have to spend the next two years smashing that apart for them because they don't actually know much about anything yet. But they certainly THINK that they do.

pg 83- Kinda like me, Jock Macdonald had to teach all over the place in order to support his family. OCA was not enough money on it's own. I find this pretty comforting. I love my job. I never want to not teach art. I would, however, like to teach it a little bit less than I currently do....

pg 93- Richard Gorman studied with Macdonald in the late 50's, saying: "He was a great man, a fine man, a very sensitive person. He had guts. He carried with him a certain attitude about his own art and teachers always teach best by example. He pursued his art in a cerain way and this was impressive to students. He was practicing art out there: he wasn't just a teacher, he was an artist." Gotta find the Joan Murray catalogue form "Jock Macdonald' Students" from a 1981 RMG show.

Intermittent Studio Note: Beyond this blog (and residency) being about my own self-indulgent narcissism, it is meant to be pedagogy. I am meaning this as exemplar for art students to know what aesthetic research is and can be. (Hint: it's kinda fun, hopefully.) I spend soooo much time trying to explain this kind of thing.

pg 93-94: It's kinda funny and sad to read Macdonald's thoughts on the administrative switch at OCA from Frederick Haines to L.A.C. Panton. When there are changes at the top at a school, the people underneath fear and feel those affects. It's funny because it's still the same. It's sad because it's still true.

pg 94- Macdonald participated in a 1952 group exhibition at the Oshawa YWCA organized by Alexandra Luke. (I've totally got to find that building!) The show was called: "The Canadian Abstract Exhibition". This was, apparently, the first show of entirely abstract painting ever held in Canada. The show had works by Macdonald, Luke, Ronald, Ray Mead, Bush, Oscar Cahen and Tom Hodgson. GO SHWA!

pg 98- The Macdonald's sailed to Europe in August, 1954. I love that. Who "sails to Europe" anymore? Such a lovely idea. (Although it would actually probably kinda suck. But whatever, the romantic idea of it is still quite lovely.)

pg 105- Macdonald on NYC: "I found painting in New York not to my liking. New York seems to be filled with set fashions of painting. Last Easter it was all 'action' painting on white grounds. I was told that if I painted in this manner I could get a show in the city. I said I wasn't a factory painter + and would not go on to any band-wagon no matter what it might mean for me." Word.(see my above comments.)