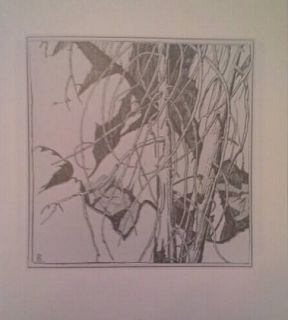 pg 15: Macdonald first used the term "modality" to describe his abstract paintings in 1938. He likely borrowed the term from Amedee Ozefant whose book, "Foundations of Modern Art" was often referred to by Macdonald.

pg 15: Macdonald exhibited four of his modalities at the Vancouver Art Gallery in April, 1938.

pg 17: He taught briefly at a junior high school, and like: holy shit. This man is, like, my total doppelganger. Now THAT is shit that could make your lung collapse. Quote from Macdonald: "I have been a week here and my feelings are that I could truthfully disappear." Having taught middle school myself for a year in 2007/08, I totally feel this.

pg 19: He taught Oshawa's Alexandra Luke at the Banff School of Fine Arts in the summer of 1945.

A year later in Calgary, he taught Marion Nicoll. Of Macdonald's instruction, she said: "You take a pencil, you are in a quiet place, you put the pencil on the paper and you sit there until your hand moves of it's own accord. You do that every day. You keep doing it. It will happen without any effort on your part."

pg 20: In the fall of 1946, he left Vancouver to take a teaching position at the Calgary Institute of Technology. Despite the fact he formed the Calgary Group that year, he took a position the following year at the Ontario College of Art. (Go team!)

pg 20: On Alexandra Luke's (awesome) suggestion, he spent the summers of 1948 and 1949 in Provincetown, Mass working with Hans Hofman.

pg 22: AND NOW THIS IS A FACT THAT I AM TOTALLY IN LOVE WITH - In the fall of 1953 seven Toronto artists displayed their work in a show at the Robert Simpson Company called "Abstracts at Home". This show was curated by William Ronald.