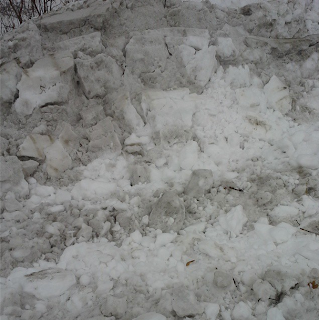 pg 45- In 1944, Andre Breton spent three months in Canada in the Gaspe Peninsula near Perce Rock writing Arcanum 17. This is kinda wicked cool as one of my best friends, Darrell Joseph, has a family cottage right at that spot (in Barchois). I've gone lobstering in Gaspe! Going to have to email Darrell and Chrissy about that. As recovering University English majors, they'll probably find that as cool as I do.

There is a lot of fantastic scholarship over the next few pages that combs through the Scottish archives of Macdonald's automatic drawings and his correspondence with Pailthorpe and Mednikoff. I gotta say though, I am soooo skeptical of automatism. I totally get how important a thing this is to the development of abstract painting and all, but I think Surrealism is, more or less, a giant pile of hogwash. They certainly made some cool art, but the "intellectual" parameters that underscored this development are, for me, highly suspect. I just don't think it's possible to consciously do anything unconsciously. Quite frankly, I'm pretty skeptical of the whole idea of a subconscious at all, or at least, our capacity to consciously draw from it, along with the apparent Freudian/Jungian significance it allegedly possesses. What Surrealism actually did was create a new set of aesthetic conventions. Those conventions are super important. The more representational Surrealist work (like Dali and Magritte) gave us an aesthetic convention for our "subconscious" which has, ultimately, given way to a sort of high school stoner basement decor. The more abstract stuff (like Miro), however, is really important, as that's what's given us Post-War Abstraction (like Abstract Expressionism). Ultimately, my question is this: if all of this stuff is coming from your "deep, subconscious mind", how can it all be so formally rigorous?

Modernists, man. They really went all in on some crazy ass shit. Once again, some great artists though.

pg 70- In a letter to Dr.P and M, Macdonald writes about his first show at Hart House (UofT): "Prof Fry...was most impressed + remarked that my short talk was the clearest exposition on 20th century art he had ever heard from any artist." That's awesome. I LOVE me some Northrop Frye. The Anatomy of Criticism played a big part in my MFA thesis, along with this paper I wrote for Monica Tap as part of her SHHRC project. I presented the paper at a UAAC conference in 2007, and again at the Macdonald Stewart Art Centre.

Cool Personal Fact: the Mac-Stew is the first public gallery to have my work included in their permanent collection. They recently acquired a bunch of my collaborative work with Otino Corsano from the early/mid-2000's. Wicked cool. For the record, we're planning on making some new stuff together after I've finished this project. I'm totally excited to do that again.