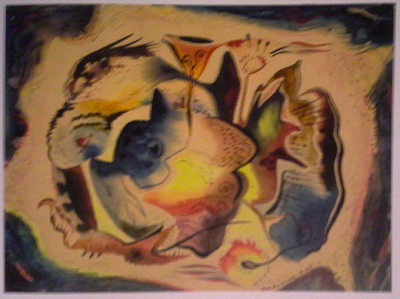 pg 111- Macdonald was offered a teaching post at the University of Southern California for the summer of 1961. I really wonder what kind of art he would have made in California had he ever arrived there.

pg 115- Ok. The first sentence kinda drives me crazy. It's not really anything that Hudson says, per se, so much as a general mis-conception that critics, curators and historians have about artists and their work. Hudson describes Fleeting Breath from 1959 as such "a mature and confident painting". The italics are mine. The notion of artistic "maturity" drives me crazy, or at least how it is generally used by historians. Macdonald's late abstract paintings are unquestionably his best, but to unwittingly dismiss the previous forty years of his work as "immature" entirely misses the point of what it is to actually make art. We can, and do, make all kinds of art in our lifetime. Some of it is good. Some of it is bad. Historians try to place these overly simplistic cookie-cutter narratives about our "development" as artists upon us, and it's silly. When we make enough work that looks the same and they happen to like the most, we've magically arrived at "artistic maturity". Like I said, this isn't so much a gripe about Ms. Hudson as it is about a commonly held misconception about artists. It's like how when the figure comes back into Pollock historians see this as some kind of conservative regression. But no: dude just got tired of making drippy allovers. It's not some kind of mid-life-art-crisis akin to a baby boomer buying a Ferrari. Had Macdonald lived another 20 years, there's a very good chance he'd have made very different work again in the last ten (especially if he'd have moved to California in the 1960's!). Artists just get into things and want to/have to do those things. Seriously, go google Gerhard Richter.

pg 115 -Ok. So I really just have a problem with Hudson's whole first paragraph. It's really grand, and more or less untrue. Macdonald's abstract paintings of the late 1950's are really great. But he had not "finally broken through to a unique and singular voice". He'd had a singular voice for quite some time before these pictures. But, even then, they are ALWAYS within the context of larger historical trends in picture making and painterly convention. Just because they fit within a larger conventionalized framework, and they always do, doesn't mean they aren't great. In fact, I would argue it it precisely how Macdonald specifically manipulates formal and material conventions within (relatively established) pictorial forms (landscape, Surrealism and abstract painting) that makes his work so good. Although I do whole heartedly agree with Hudson's assertion that the strength of Macdonald's late work does, in fact, come from "his ability to compositionally suspend contradictory preoccupation with liberating automatism and rigorous design", she's trying to ascribe a certain degree of importance to Macdonald's formal ingenuity which isn't really true, and certainly isn't necessary. You can totally tell, just by reading this first paragraph, that Hudson is a historian in the mode of the October Posse (Rosalind Krauss, Benjamin Buchloh, Hal Foster, etc.) who ascribe art historical importance on the basis of their historical novelty and priority. Personally, I totally do not. It's just all so 1990's.

To extend on this, what makes Macdonald so special and (highly unusual in his moment) is his capacity to evolve (and thrive) in conjunction with the spirit of his age as it changed throughout his lifetime. The vast majority of artists, in his era, developed a signature style and made variations of that style for the entirety of their career. This is, more or less, a form of high brow branding. Ultimately, it becomes incredibly limiting. Macdonald continued to grow and evolve (after he'd already reached "maturity" and a relatively high degree of notoriety and acclaim). He was as a product of his environment, a chronicler of the zeitgeist. This is amazingly cool, genuine and real.

pg 115- Now this is a really great, and really true couple of sentences: "Revelation of the catastrophic power of industry to destroy life during World War I confirmed that science and religion should not be opposed. No longer could they function as conflicting lenses through which the world and the future of humanity might be imagined." The sad part is that we haven't really learned that yet, despite a hundred years of perpetual catastrophe....

pg 118- Ya. So despite my previous objections, this is a really good essay with a really compelling range of research and references.